The Moment Everything Changed

I wasn’t sure what to call this article. I almost called it “The Day My Life Changed”. But life doesn’t change in days or weeks. It changes in seconds. When you get that epiphany. When the light bulb goes off. When things just click.

A number of things led to my life changing. It could be traced back to the moment I picked up my first romance novel. It could be the moment I found a circle of writers who agreed who read and critique my books. Or even my first RWA (Romance Writers of America) conference when I finally got to meet these longtime internet friends in person. Some would say the second I hit that “publish” button on my first book was the biggest moment.

But there’s one that sticks out to me. One exceptionally stressful day when I realized things were starting to go right.

A little bit of back story: I come from a business background. When I published my first book, I was working in internal controls at a large manufacturing company. I was ready to publish. I had studied the publishing industry like I studied for the CPA exam, I put out five books at once and, most importantly, I had been a romance superfan since I was twelve years old (since there are no ratings on books, the store clerks didn’t mind selling me any books I wanted!)

Even though I had done everything “right”, publishing is strange. I didn’t know if readers would connect with my voice and the market was getting more and more competitive every year. It would be easier to be patient if my job at the time had been going better.

On this particular morning, I was already anticipating a long day. My small department was leading a full day meeting (8 full hours of boring…). I arrived to the office at 8:26 in the morning, four minutes before the meeting started. My boss met me at the door with an exceptionally pleasant “You’re late.”

Late? I had plenty of time to make it to the meeting… But nope. Apparently overnight, my manager had changed the speakers, and the first section of the day was now being led by me. I had to present to all the heads of the company with no preparation and only three minutes to spare.

So after I swallowed back my frustration and put on a pretty good presentation (if I do say so myself) I was finally able to sit down and relax while my boss led the next section. Since nothing she was going over was news to me, I took the chance to take out my phone and load my sales. Just a little something to cheer me up.

And that’s when it happened. My light bulb. My epiphany. My moment. My sales weren’t the handful or so I’d been getting since I published. The first book in the series (TEACHING THE BOSS, which was free) had gotten over a thousand downloads. Throughout the day, the number just kept growing higher and higher.

It was shocking. Unbelievable. There was no paid promotion lifting it up. Just honest to goodness readers connecting with my little story. My voice. And as someone who has been a bit of an outsider my entire life, it was a crazy moment. Not only did I realize that this frustrating job might not be my future, but it was also the moment I realized that I wasn’t alone. 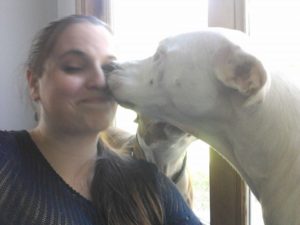 find a photo of me wearing a business suit and looking all official, but I think the fact that there’s no photo record of that period of my life says a lot. Instead here’s a selfie fail of me with my first foster dog. I think my messed up hair speaks volumes about why I needed dog kisses at that time in my life 😀