Please enjoy this special scene from RELENTLESS, the latest book in the Fractured Farrells series! It’s available on December 6th 2016 at all major retailers! 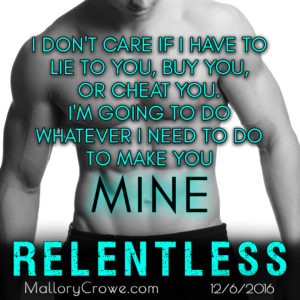 RELEASE SPECIAL: For 3 days only, RELENTLESS is 25% off, so get it at this special price while you can!

After about thirty minutes of silence, she heard movement behind her and glanced over to see Nathan standing and stretching. She was about to go back to painting when she realized he’d hooked his fingers in the hem of his sweater and was pulling it up and over his head.

Of course, right as she was truly enjoying the way he filled out the t-shirt that had to be one size too small for all those muscles, he looked over and met her eyes. She whipped her head around so fast she came an inch away from running her paintbrush completely across the window.

“It’s too quiet,” said Nathan, thankfully not calling her out for staring.

“I can’t really talk while doing this.” She went back to painting as though she never stopped.

“I know. But can we put on some music or something?”

“Uhhh… I have some music on my phone, but nothing you would like.”

“What makes you think you know what I like?”

“Uhhh…” Katy carefully stepped off the stool she’d been standing on and set the paintbrush and can on top of the stool. “Well, I have eclectic taste. There’s pop and electronic and metal—”

He shook his head. “Just put it on shuffle. If I don’t like a song, I’ll tell you. This will help us work longer. I read a study about working late nights and music was a big factor.”

“Yes. It’s why all the employees got headphones and a small desk speaker as a Christmas present from corporate last year. We started a music-friendly workplace. As long as it’s not loud enough to interfere with anyone else’s workspace, it’s encouraged.”

It was a strange reminder of how much things had changed since the last time she’d been around Nathan. He wasn’t a carefree kid who had just graduated from a prestigious high school. He was a business owner. After his father had died, he’d inherited part ownership of the company. It was hard to imagine that kind of responsibility. Katy ran the inn, which had twenty-five employees between full-timers, part-timers, seasonal help, and a few contractors she dealt with. Nathan dealt with thousands of employees and clients.

She pulled out her phone and put her entire playlist on shuffle. There would probably be something embarrassing that would come on sooner or later, but there was much less shame when someone was doing her this big of a favor at one in the morning.

Once again they fell into a rhythm. He worked diligently on the floors while she went over the windows. She’d gotten the hang of the pattern and strokes, so it seemed to go faster. Maybe Nathan was right. She was almost painting in time with the music, making the work just flow by. Soon enough she was done with the entire first coat.

She set the paint down as she stepped back to admire her handiwork.

“It’s amazing what a difference something so small can make.” It was dark, so the red on the glass was barely visible and the Carriage House was beginning to look like its old self. “How’s the floor coming along?”

“I think it’s going well. There were a few stubborn spots, but the rest has come off really easy.”

She pivoted around to look at the floor, and there was hardly any sign of the destruction that had been there earlier. “That’s amazing,” she breathed. She tried to imagine doing all that scrubbing herself in between coats and the very thought made her exhausted. She still had to get into the basement storage to find some suitable linens to put on the tables that were now naked. There was a chance she could get the vendor to deliver a few of the same tablecloths that had been stained to replace the ruined ones, but she wanted to have an option B ready. Same with the chairs. Then she’d have to place all the tables back and redecorate them.

Yep, it was a damn good thing that Nathan had shown up.

The song switched from an upbeat pop song to the gentle strumming of a guitar as the gravelly tones of a country singer started to sing a love song.

“I never pegged you for a country girl,” said Nathan with a sideways smile.

“Don’t make fun of my country,” she said even as she crossed to her phone to skip over the song.

“No.” He reached out and set a hand on her upper arm. She turned to him and he moved in closer. “I like it. It fits the mood.”

He let out a small laugh even as he smoothly hooked an arm around the small of her back. “I was thinking…intimate,” he said softly into her ear as his other hand caught hers.

Katy didn’t know whether she was too tired to think straight or whether she was being seduced by the romantic song and setting, but when he started to rock to the music, she moved with him, letting him take her into the slow dance. When was the last time she’d slow danced with a man? Really slow danced…not with a relative or friend but with a man. Someone she knew wanted her? Someone she knew was touching her because they wanted to?

“I’m probably getting paint on you,” she said even as she rested her head against his chest. She’d long since kicked off her shoes and barefoot, the height difference between them was even more noticeable.

“My white shirt can handle a little white paint.”

“What about the blue jeans?”

“Well, I suppose that’s the risk I take of having a beautiful woman in my arms.”

End of Bonus Scene! Make sure to pick up RELENTLESS today!

RELEASE SPECIAL: For 3 days only, RELENTLESS is 25% off, so get it at this special price while you can!