Please enjoy this special scene from REMORSELESS, the latest book in the Fractured Farrells series! It’s available on August 2nd 2016 at all major retailers! 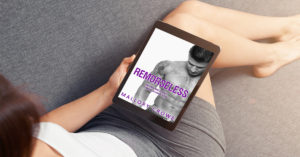 RELEASE WEEK SPECIAL: For 7 days only, REMORSELESS is 25% off, so get it at this special price while you can!

Instead, she leaned back and closed her eyes, trying not to focus on the speedometer as Logan accelerated onto the freeway and swung into the fast lane. She just survived one attempt on her life. She really didn’t want to get into a car crash now. “Careful,” she breathed as she reached over to rest a hand on Logan’s thigh to make sure he heard her.

He jerked at the touch and he looked over his shoulder before he swung the car into the slow lane and then onto the shoulder.

Julie’s heart leapt into her throat at the sudden maneuver and she clenched her fingers, only belatedly realizing that she was squeezing his thigh. Before she could remove her hand, he’d brought the car to a stop and jumped out. Had he even looked to make sure some other car wasn’t going to run into him?

But then he was on her side and opening her door. She couldn’t even try to ask him what he was thinking about doing before he set his hands on her legs and turned her to face him. “How are you feeling? Do you need to go to a hospital?” Without waiting for her response, he set his hands on her neck and gently tilted her head back to look at her neck.

“I think I’m okay…” she whispered. He released her and she looked at him. From the height of the seat, she was now eye level with him, and her knees were parted far enough that he stood right in the middle. She was suddenly intensely aware of how intimate this position was, and the pain in her neck was now the last thing on her mind.

“I didn’t see you when I went back into the gas station,” he said.

“I recognized the man who…I recognized him from the hotel this morning. He must’ve followed us and I assumed he was a reporter or paparazzi.” Her throat was still sore, but if she whispered, she was able to get more words out without intense pain.

“Why didn’t we call the police? That man should be in jail right now.”

Logan shook his head. “He wasn’t the one after me. He was just a hired hand. If the cops come in, then everyone will know where I am and I’ll be in even more trouble.”

So he wasn’t just going to Colorado for fun. He was running from something. Maybe it was time for her to ask for a raise. “Do you still have his phone?”

Logan fished it out of his back pocket and handed it to her. The small flip phone was outdated and cheap, which meant it probably didn’t have a lot of personal information on it. There were no text messages received or sent, but there was one number in the call log. Julie took her own phone out and snapped a picture of the call log before she handed the phone back to Logan. “If you don’t want him to find us, you should leave the phone here.”

Logan took the phone. “They can track us even if we don’t use it?”

Logan tossed the phone and Julie inwardly shuddered. This was a stupid time to think about littering, but damn she hated leaving waste in such a pretty natural environment; it seemed like a shame. Then Logan ran a hand over her arm and the surprise touch pulled her from her thoughts.

“Are you sure you’re okay?”

Julie looked to where his hand stroked her bare arm and then back to his face. The bright sun was behind him, putting most of those sharp features in shadows so even his ice-blue eyes seemed darker.

She’d always thought Logan was attractive, but seeing him now, with all his attention, and even his hands, on her, an unfamiliar bolt of longing went through her. She’d almost died. She’d almost died and Logan had saved her, and the adrenaline was wearing off but it was still there, and damn, she wanted to pull him closer and kiss him until her throat stopped hurting and she forgot what had almost happened.

Logan patted her leg. “If you’re sure you don’t need to get checked out, we should get going.”

Julie nodded wordlessly. Partly because she didn’t know what had gotten into her…

End of Bonus Scene! Make sure to pick up REMORSELESS today!

RELEASE WEEK SPECIAL: For 7 days only, REMORSELESS is 25% off, so get it at this special price while you can!