Please enjoy this special scene from RESTLESS, the latest book in the Fractured Farrells series! It’s available on October 4th 2016 at all major retailers! 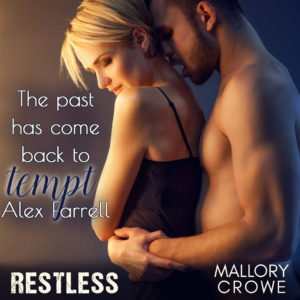 RELEASE SPECIAL: For 3 days only, RESTLESS is 25% off, so get it at this special price while you can!

“Marriage matters to me.” Alex abruptly stood and started back to the house.

Ashley twisted around and carefully got up so she wouldn’t fall into the water and followed him inside. “Fine. If you don’t want to marry me, then I’ll move on. You still have brothers, right?”

Alex pivoted around and advanced on her. “What’s that supposed to mean?”

“Nathan is closer to my age than you. Maybe he’d be a better option. He’s used do doing crazy things on a whim. I’m sure I can…convince him.” She looked innocently up at Alex and tried not to be cowed by the ticking in his jaw.

“You stay away from Nathan.”

“Don’t worry about your brother. I already told you, I’m not a gold digger. I’ll be completely up front with him just like I was with you.”

Alex took another step closer. “You’re going to offer him the same thing you offered me?”

Ashley tried to find her voice. “It seems fair.”

“You’re going to offer to fuck Nathan in exchange for his name?”

Ashley tilted her chin up in defiance. “In exchange for his signature on a piece of paper, I’ll do whatever Nathan wants me to do. He’s about as pretty as you are. Maybe I can even close my eyes and pretend it’s you.”

Alex reached out and grabbed her arm. Not painfully, but forcefully. “Nathan isn’t going to touch you.”

Ashley leaned in closer. “Then stop him. Sign the paper yourself. But you can’t have it both ways, Alex. You’re my first choice, but my number-one priority will always be my freedom. If you’re not going to get it for me, I’ll get it from someone else.”

“Not Nathan,” he repeated, his grip tightening.

“Then who? Who do you want me to go batting my eyelashes at? Maybe next time I’ll buy them a few drinks first to make them more agreeable than you. I can wear a short little skirt to give them a preview of what they’re getting out of the deal.” His grip tightened again, and she knew she was hitting a nerve. “I have this great little dress. It’s all black sequins, which I thought would look gaudy as hell, but when I put it on, every man in the room has to look at me. It’s like it calls to them. I bet if I walked into a bar in Manhattan wearing that, I’d have fifty different rich Wall Street guys begging to marry me.”

Alex snapped and he bent forward to kiss her roughly. Ashley didn’t fight him. She didn’t want to. She might not know who this new Alex was or really think they’d be compatible as husband and wife, but she trusted him. She trusted him to do the right thing by her, she trusted him to protect her, and she trusted that even if he slept with every pretty woman who looked his way, she’d still always want him on some level.

So she set an arm over his shoulders and let her body fall against his as she kissed him back. Even though she’d been apart from him for so long, his body came back to her. Just like that first night on the island in the kitchen, she molded herself to him, pressing her breasts to his hard chest and feeling the very evident erection pressed against her stomach.

Alex finally let go of her arm to run his hands over her back, one cupping the nape of her neck to hold her in place as he deepened the kiss. The other moved lower and settled half in and half out of the waistband of her shorts.

It had been so long since she’d kissed anyone, let alone her Alex, it was easy to get carried away. Even the smallest things seemed so sensual. The size of his hands against her. The stubble under her fingertips. How his fingers would tighten on her ass, a grip that would’ve been painful if it didn’t turn her on so much.

When he pulled away from the kiss, they were both gasping for air. But instead of dropping her as if she were on fire and escaping into the house, Alex held her close, resting his forehead against hers. “I’m not a white knight,” he said finally.

Ashley tightened her lips as she tried to bring herself back to earth. “I’m not a damsel,” she managed between breaths. “I’m a businesswoman offering you a deal.”

“You should never make a deal when you have this much to lose.”

End of Bonus Scene! Make sure to pick up RESTLESS today!

RELEASE SPECIAL: For 3 days only, RESTLESS is 25% off, so get it at this special price while you can!