Please enjoy this special scene from THE COCKY THIEF, the first book in the Stolen Hearts series! 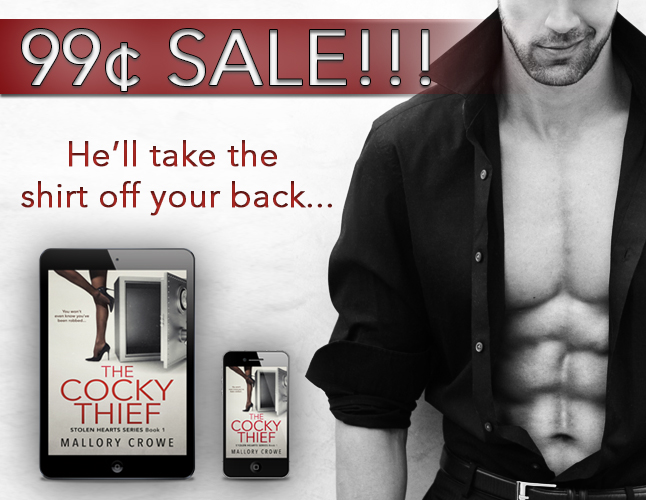 At the same moment, Jennifer stepped out of one of the doors on the other side of the hall. They both froze in place as their eyes met and the seconds ticked by while neither said anything.

“What are you doing?” Jennifer’s gaze scoured his body as though looking for clues.

Well, hell. He’d wanted to make this easy for her, but he had a part to play. So he went full in. Crossing the hall in two long strides, he set his hands on her hips and pulled her close before he crushed his mouth against hers. She was still frozen in place for a few moments, but soon enough she tilted her head and met his kiss.

When she finally pulled away, he knew he had to act fast. Before she could ask any more questions he didn’t want to answer, he blurted, “I saw you wandered off and I figured this would be a good time to join you.” He leaned in and kissed her again; one of his hands moved to the small of her back to hold her closer as she wrapped her fingers in the collar of his jacket. He only intended to kiss her briefly and head off, but when she pulled him in closer, he didn’t even try to fight it.

Christ… He hooked a hand under her thigh and brought her leg up to wrap around his waist, pressing his now raging hard-on right into her core. The only thing keeping him from getting what he really wanted was the clothing between them.

The click-clacking of heels on the stone tile brought a much too abrupt stop and they both pulled away at the same time. Jennifer covered her mouth with a hand while Austin pushed his now shaking hands through his hair as they each gasped for breath. Whoever they’d heard never materialized, so they must’ve turned off already. Whether they were seen… It wasn’t as if they were doing anything wrong. They were two consenting adults without dates.

Besides, if people thought he was fucking the daughter of the bride on the side, that would be another good excuse to be wandering around the halls.

He needed to say something smart and seamless to Jennifer but there was nothing seamless to say after that. The only logical thing would be to drag her right up to his room to finish the job. No. Not logical. He couldn’t have a temporary girlfriend while he was on the job. But how could he kiss someone like that and just walk away?

He didn’t know how, but he somehow managed. Without a word and one foot in front of the other, Austin left Jennifer standing alone in the hallway.

Jennifer fell against the wall and watched Austin’s retreating form. That was… Bad? Good? She didn’t even know anymore. She supposed she should be grateful that he didn’t start to interrogate her about what she was doing wandering around the house when she should be eating cheesecake.

She was still reeling from the kiss. Kiss seemed like too simple of a word. They’d been moments away from ripping off the rest of their clothes and finishing what they’d started in the limo.

As soon as the fog in her mind had cleared, she pushed away from the wall and continued down the hall. The boots she wore had soft soles that made no noise on the tile. She was supposed to be memorizing the layout of the house, but she could barely think straight.

This was a prime example of why hooking up on the job was never a good idea. Distractions got you caught and with the people she’d ripped off, getting caught didn’t get you arrested. It got you dead.

End of Bonus Scene! Make sure to pick up THE COCKY THIEF today!