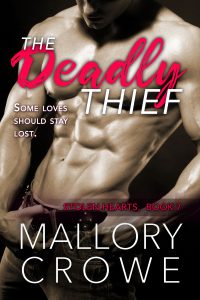 Gabby stared at her best friend Kate and willed her to show a reaction. Any reaction at all. Something for her to go on. Laugh? Tell her she’s an idiot? Something….

“Would you please stop?” muttered Kate.

“Well, read faster! I want to know what you think!”

Kate scoffed. “You already know what I think. I think you’re crazy.”

“I’m not crazy. I thought about this a lot, Kate. I can’t fully move on until I get closure. I’m not going to get closure until Hunter and I are face-to-face. Since I don’t know how to find him, I need to get his face to me. I don’t see crazy anywhere in that plan.”

Kate tilted her head, and those brown eyes were immediately filled with judgment. “You’re emailing some security company that has nothing but some fake-looking website, and you’re planning to lie to them and ask them to come and save you from a shady organization that wants you dead.”

Gabby was more than ready to refute this. “One, a website can’t be fake. It’s obviously a real webpage.” Even if the only information on the page was an email address and the notification that demand was more than supply and not everyone would get a reply. Which meant that this crazy—er, rational—plan probably wouldn’t work anyway. “Two….” She was at a loss to explain the logic that had made so much sense to her last night as she’d furiously typed up her damsel in distress story to lure Hunter back to town. “Two, Ryan has been all over town with that tramp, and I feel like this is a necessary step.”

“No, Gabby. Online dating is a necessary step. Using deception to get in touch with some long-lost ex-boyfriend is definitely not necessary.”

“He wasn’t my boyfriend,” said Gabby so quickly that she only belatedly realized that it didn’t help her case in any way. Hunter and she had a sordid past, but she’d never touched him. Not once. And that was why she needed closure so badly. Maybe if they’d kissed and it had been horrible, she wouldn’t feel a pit in her stomach whenever she thought of him. Maybe if she knew that he was happily married with a horde of children, she wouldn’t feel the wet blanket of guilt every time she remembered the way he’d looked at her as he’d been carried away in that police car.

She couldn’t move on from her disaster of a marriage and try to figure out where the hell her life was going without getting rid of this baggage first. All of a sudden, Gabby reached forward, grabbed the laptop, and hit the Send button.

Kate’s lips tightened, but she thankfully didn’t say anything.

“It needed to be done,” said Gabby, feeling the need to defend herself from the silence.

“Well, there’s no turning back now. What do you think you’ll say to this mysterious Hunter if he does show up on your doorstep?”

Gabby had imagined Hunter coming back for her thousands, if not millions, of times over the years. And after a long time, she’d finally come to the perfect conclusion. “If hell freezes over and this actually works? I’m going to kiss him the first chance I get.”